The scale has three subscales:

The measure can be used with adolescents (13+) and adults. It has also been validated in samples at high risk of eating problems such as female athletes and fashion models.

While developing the scale Garner et al. (1982) validated the long version (EAT-40) and short version (EAT-26) with 160 females with anorexia nervous and compared the results to a sample of 140 healthy females. It was able to discriminate between these groups and the subscales were found to have high internal consistency. The normative data from this research can be used to compute percentile comparisons.

The EAT-26 is well-validated with female samples, with scores on the EAT-26 being highly predictive of scores on the original EAT-40 and other validated measures (Garner et al., 1982). The scale can be used in men however comparison groups are not available at this time.

The total score (between 0 and 78) provides an overall risk score, where higher scores indicating greater risk of an eating disorder. Total scores 20 or above are considered to be in the clinical range.

Scores on the three subscales can be examined to assertion the focus of disordered eating:

In addition to the raw scores the results are presented as two percentiles based on published normative data (Garner et al., 1982):

The Healthy Female Percentile compares the respondent’s score to women who do not have an eating disorder. A percentile of about 50 represents a typical (and healthy) relationship with food. Percentiles above the 86th percentiles (raw score = 20) indicate that the respondent has more eating concerns than 86 percentile of healthy females, and puts them above the clinical cutoff, indicating a probable eating disorder.

The Anorexia Nervosa Sample percentiles compares the respondents scores to an anorexia nervosa sample. A percentile of about 50 is average in comparison to the anorexia nervosa group and indicates the respondent answered the question in a way that is typical of someone with an eating disorder. Higher scores represents more severe eating disorder symptoms.

The four behavioural questions (questions 27, 28, 29, 30 and 31) are not included in the calculation of the above scores, but are major risk factors important to the health of people with an eating disorder and can be individually examined. 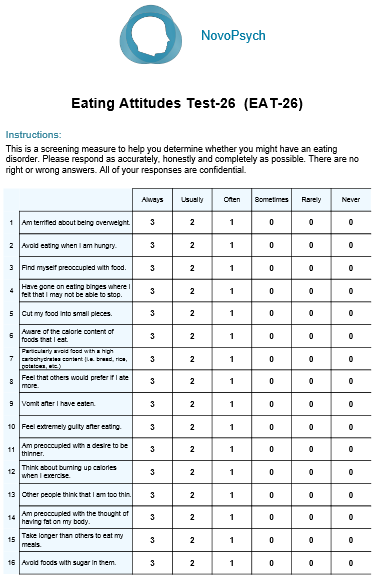