The DES-II is a 28-item, self-report measure of dissociative experiences. Dissociation is often considered a psychological defense mechanism for victims of traumatizing events, and the scale is of particular use in measuring dissociation among people with PTSD, dissociative disorders, borderline personality disorder and those with a history of abuse.

More broadly, dissociative symptoms can be considered as a transdiagnostic indictor of dysfunctional coping, with many disorders being associated with higher than average dissociation. The scale can be used during the course of treatment to track progress over time.

The DES has three sub-scales:

In a meta-analysis (IJzendoorn & Schuengel, 1996) showed DES has good convergent validity with other dissociative experiences questionnaires and interview schedules. The scale also showed impressive predictive validity, in particular concerning dissociative disorders, traumatic stress disorder and abuse. Another meta analysis (Lysesenko et al., 2018) found that the DES was a useful tool across many disorders. Normative data across clinical and non-clinical samples have been reported (IJzendoorn & Schuengel, 1996), with the following means and standard deviations:

Some data has shown that the three subscales measured by the DES do not form distinct factors, with most factor analyses showing only one overarching factor (IJzendoorn & Schuengel, 1996). Therefore overall scores are the most reliable measure.

The total scores can be between 0 and 100, where high levels of dissociation are indicated by scores of 30 or more.

The total score is also presented as percentile ranks compared with clinical and non-clinical samples (as reported by IJzendoorn & Schuengel, 1996). This can be useful for comparing the a respondent’s score with comparison groups. A percentile of 50 compared a general psychiatric patient indicates the typical score for those under psychiatric care, and is lower than than typical scores seen in personality disorders, PTSD and dissociative disorders.

2. Depersonalization/Derealization Factor
Depersonalization is characterized by the recurrent experience of feeling detached from one’s self and mental processes or a sense of unreality of the self. Items relating to this factor include feeling that you are standing next to yourself or watching yourself do something and seeing yourself as if you were looking at another person, feeling your body does not belong to you, and looking in a mirror and not recognizing yourself. Derealization is the sense of a loss of reality of the immediate environment.
Items — 7, 11, 12, 13, 27, 28.

3. Absorption Factor
This factor includes being so preoccupied or absorbed by something that you are distracted from what is going on around you. The absorption primarily has to do with one’s traumatic experiences. Items of this factor include realizing that you did not hear part or all of what was said by another, remembering a past event so vividly that you feel as if you are reliving the event, not being sure whether things that they remember happening really did happen or whether they just dreamed them, when you are watching television or a movie you become so absorbed in the story you are unaware of other events happening around you, becoming so involved in a fantasy or daydream that it feels as though it were really happening to you, and sometimes sitting, staring off into space, thinking of nothing, and being unaware of the passage of time.
Items — 2, 14, 15, 17, 18, 20.

When the scale is administered on more than one occasion NovoPsych will graph responses over time, indicating symptom changes and response to treatment. 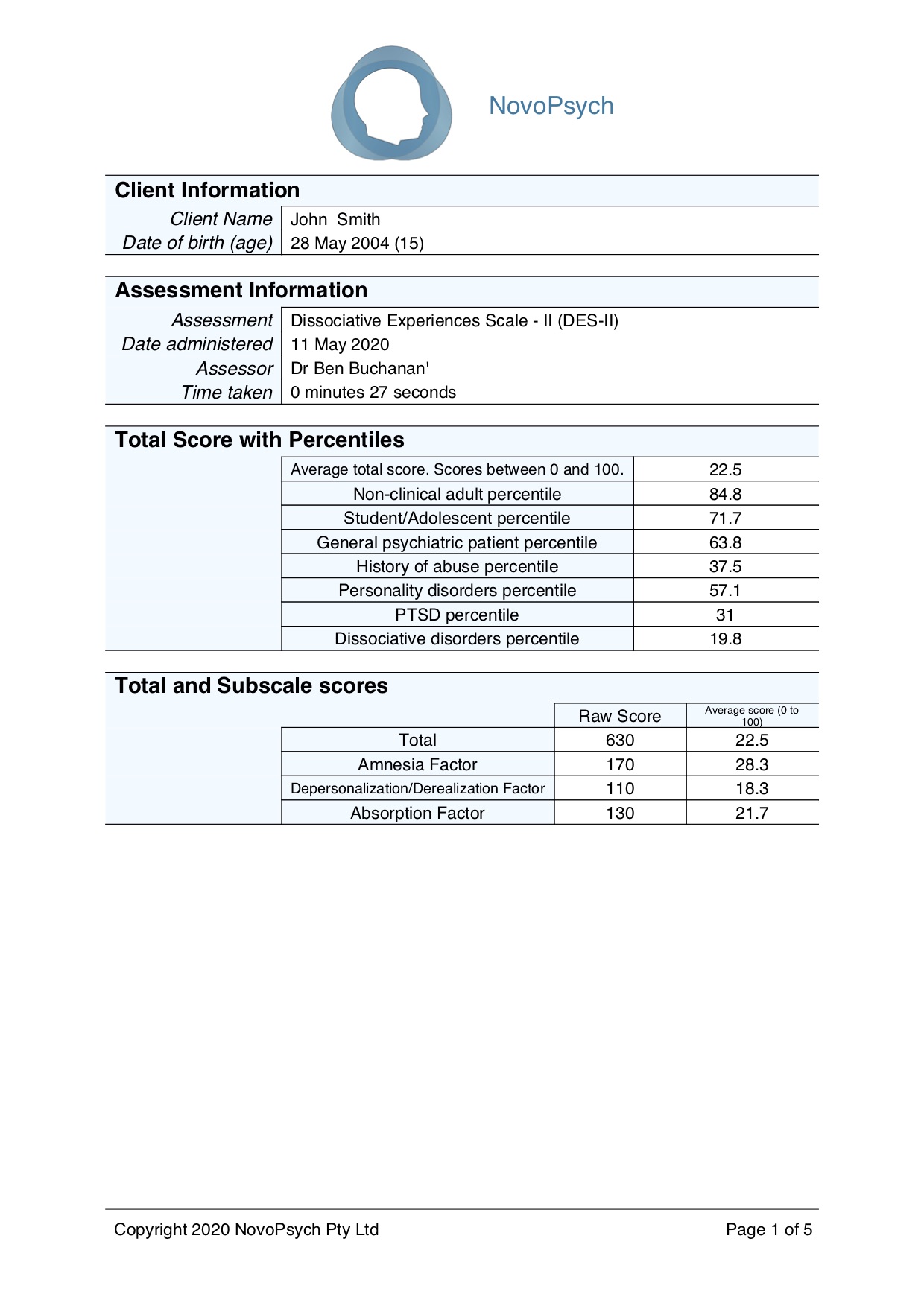