The DASS-21 is the short form of the DASS-42, a self-report scale designed to measure the negative emotional states of depression, anxiety and stress.  This scale is suitable for clinical settings to assist in diagnosis and outcome monitoring, as well as non-clinical settings as a mental health screener.

The DASS is based on a dimensional rather than a categorical conception of psychological disorders, and scores emphasise the degree to which someone is experiencing symptoms rather than having diagnostic cutoff points.

While the test was developed with individuals older than 17 year of age, due to the simplicity of language, there has been no compelling evidence against the use of the scales is children as young as 12.

As the three scales of the DASS have been shown to have high internal consistency and to yield meaningful discriminations, the scales meets the needs of both researchers and clinicians who wish to measure current state or change in state over time (e.g., in the course of treatment). It is a useful tool for routine outcome monitoring and can be used to assess the level of treatment response.

The DASS-21 was initially developed using a sample of responses from 504 students, taken from a larger sample of 950 first year university students. The items were subsequently checked for validity against outpatient groups including patients suffering from anxiety, depression and other mental disorders.

The DASS-21 has been extensively normed, with data used for interpretive purposes based on a sample of 1794 non-clinical adults (Henrey & Crawford, 2005). Consistent with the DASS-42, the DASS-21 has internal consistency and concurrent validity in acceptable to excellent ranges (Antony et al., 1998).

In addition, scores for each subscale are categorised into five severity ranges: normal, mild, moderate, severe and extremely severe. The severity labels are used to describe the full range of scores in the population, so ‘mild’ for example means that the person is above the population mean but probably still below the typical severity of someone seeking help (i.e. it does not mean a mild level of disorder).

Each of the three DASS-21 scales contains 7 items.

When administered more than once a graph is produced showing change in symptoms over time. Percentiles are graphed which indicate the level of symptoms compared to the general population. A percentile above 90 is indicative of significant psychological distress, while scores below the 90th percentile are more indicate of psychological health. However given the dimensional nature of psychological distress it may be more useful to consider even small changes in symptoms over time, rather than focusing on categorical differences. 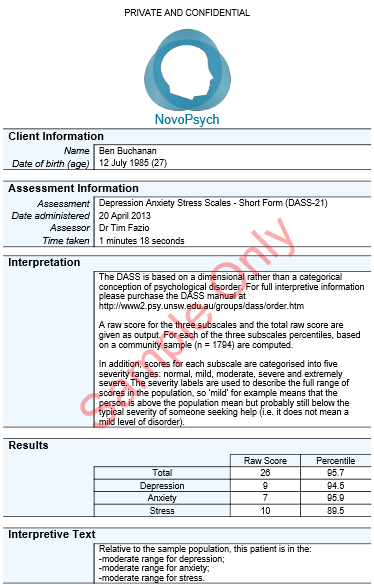