The scale is designed to assess a general “trait” pattern of adult attachment and is helpful in conceptualising how clients respond emotionally to close relationships. When used as part of a therapeutic process, this tool is helpful in collaborating with a client to create a shared formulation around the underpinnings of relationships difficulties.

If a respondent is not currently in a romantic relationship the therapist can ask them to recall how they felt when they were last in one.

Brennan et al. (1998) reported that the ECR long version had a high level of internal consistency within the two factors, with coefficient alphas of .91 and .94 for the Anxiety and Avoidance subscales, respectively, in undergraduate students. Wei et al. (2007) confirmed in their sample (N=851) that the short version of the scale had two factors with high internal consistency, with coefficient alphas of .78 (Anxiety) and .84 (Avoidance). Correlations between the Anxiety and Avoidance subscales were low (r = .19), which indicated that these two measures reflected distinct dimensions of attachment.

Results consist of two scores for the two separate factors; attachment anxiety and attachment avoidance. The minimum score for each scale is 7 and a maximum score of 42. In addition, scores are represented in terms of percentile ranks compared to a normative sample. A percentile of 50 represents typical (and healthy) attachment, whereas higher percentiles represent more difficulties with adult attachment compared to peers. 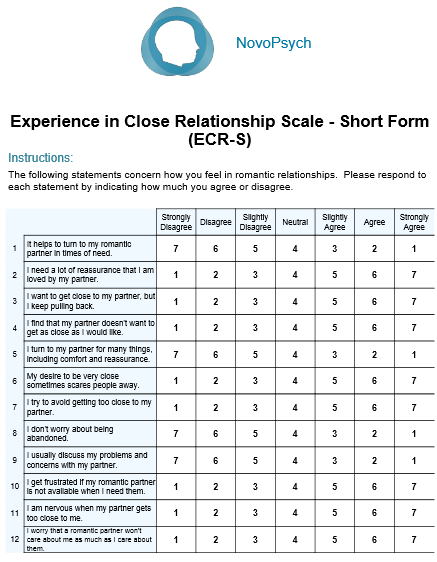