The Supervisory Styles Inventory (SSI) is a 25 item scale which measures the interpersonal or relational aspects of supervisors as perceived by supervisees. The SSI is completed by a supervisee to rate their perceptions of their supervisor’s style based on three subscales: Attractive, Interpersonally Sensitive, and Task-Oriented. This scale can be useful to start a discussion around the preferences a supervisee has for their supervision.

In addition, the supervisor may choose to use this scale to self-assess by self rating their supervisory style and compare the results to the perception of the supervisee.

Derived from research identifying relationship and relational aspects as an important part of successful supervision, Friedlander and Ward (1984) identified dimensions of supervisory style that were consistent among supervisors and supervisees. Through content analyses of transcribed interviews, a number of items were developed and then assigned a category based on applicability to supervisor or supervisee. The most stable items were kept for use in the instrument, and they found the three underlying constructs (attractive, interpersonally sensitive, task-oriented).

Herbert and Ward (1995) found the SSI to have internal consistency reliabilities of .93 (Attractiveness), .91 (Interpersonally Sensitive), and .92 (Task-oriented). Test-retest reliabilities are .92 (Friedlander & Ward, 1984) suggesting that the instrument is consistent over time and with various populations.

Research by Bussey (2015) obtained norms from 90 supervisees who were recently graduated or enrolled in a mental health / school counselling program, and their mean subscale scores (and standard deviations) were:

Note the original version of the SSI had eight items that did not correspond to the above factors, so they have been excluded from the scale on NovoPsych. In addition, the instructions have been modified to ask that at least five questions be rated as average or below, which helps reduce ceiling effects.

The SSI has three subscales:

The instructions of the scale asked that at least five questions were marked as average or below, which helps the scale discriminate which of the three supervision styles are most and least endorsed. Noting the pattern of the highest and lowest subscale scores can help a supervisor understand the supervisee perceptions, and adjust supervision if appropriate.

If the scores on all subscales are consistently high (above 6) it may indicate one of the following: 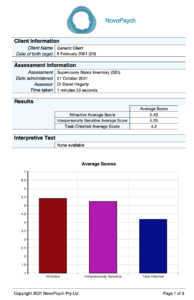