This measure is completed by a child. There is an alternative parent-report version that can be used in conjunction with this scale (ChOCI-R-P). The scales is useful in the diagnosis of childhood OCD and to characterise the nature of obsessions and compulsions. It can also be used to track symptoms over time.

The ChOCI-R is of similar format to the Child Yale-Brown Obsessive Compulsive Scale (CY-BOCS), as compulsions and obsessions are addressed separately, but is self-report rather than clinician rated.

When the scale is administered on two or more occasions scores are graphed over time. This can provide useful feedback in the context of treatment and information about which OCD symptom clusters have reduce or remained higher.

Uher, Heyman, Turner and Shafran (2008) evaluated the test with a clinical sample of 285 children and adolescents with OCD. The ChOCI-R has acceptable internal consistency, and the ChOCI-R impairment scales show convergent validity with the similarly-structured CY-BOCS. The measure also demonstrates divergent validity with a measure of general child psychopathology. The self-report version of the ChOCI-R yielded clearer distinctions between obsessions and compulsions than the parent-report version.

A raw score for each compulsion and obsession subscale is provided as output, along with raw scores for total impairment (range 0-48) and total symptoms (range 0-40).

Each subscale is computed as follows:

Scores are also presented as percentiles based on responses for a sample of children referred to an OCD clinic (Uher et al., 2008). The percentiles are helpful for interpretation as they contextualises the respondents’ score in relation to patients with OCD. For example, a percentile of 50 is the average score for a child with OCD, and indicates typical (and clinically significant) symptoms. 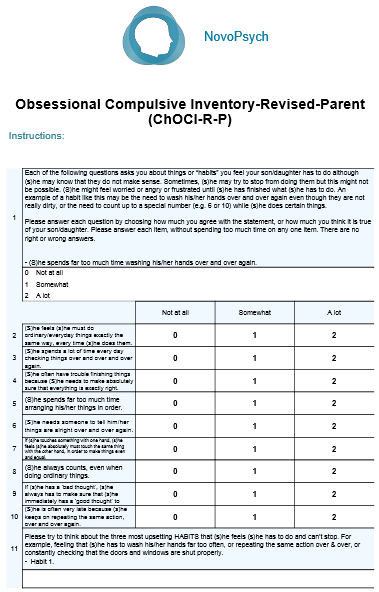