The Generalised Anxiety Disorder Assessment (GAD-7) is a brief measure for symptoms of anxiety, based on the generalised anxiety disorder diagnostic criteria described in the Diagnostic and Statistical Manual of Mental Disorders (DSM). The GAD-7 assessment asks patients to evaluate their level of symptoms over the last two weeks. When administered on multiple occasion at the start, middle and end of treatment, responses can be used to track treatment progress over time.

Given the simple language used in the assessment it is appropriate for individuals as young as 14 years. When used as a screening tool, further evaluation is recommended when the score is 10 or greater.

Using the threshold score of 10, the GAD-7 has a sensitivity of 89% and a specificity of 82% for generalised anxiety disorder.

A raw score (from 0 to 21) is presented as well as a percentile rank based on the Lowe et al. (2008) community sample. Given that females score slightly higher than males, a percentile for each gender is presented – the appropriate gender percentile should be selected for interpretation.

Percentiles provide a useful context for comparing a respondents results with a normative sample. A percentile of 50 represents typical (and healthy) patterns of responding, while higher percentiles represent higher levels of anxiety symptoms. 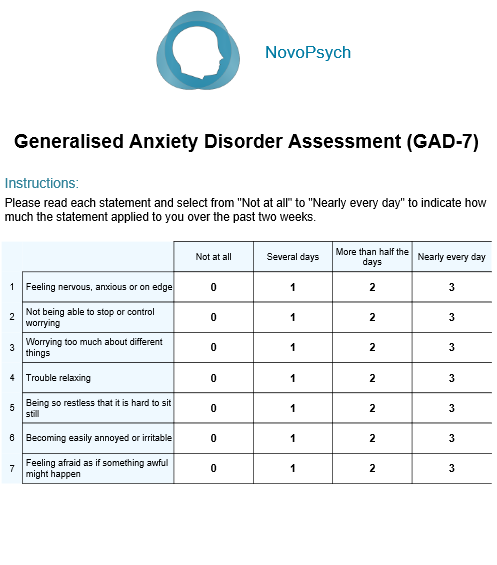 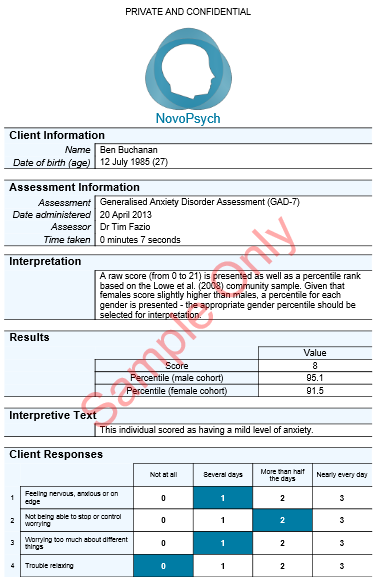