The Mood and Feelings Questionnaire (Short Version) – Self Report(MFQ-Self) is a 13-item self-report measure assessing recent depressive symptomatology in children aged 6-17 years. The MFQ-Self asks the child to report how they have been feeling or acting in the past two weeks. The scale is useful in clinical practice to screen for depression as well as track symptoms over time. Young people often more readily disclose emotions via a questionnaire than expressing them verbally, so the MFQ-Self is ideal for clients who otherwise may not articulate their feelings.

A parent version of the same measure  is also available (MFQ-Parent), and the two measures can be used in combination.

During the development of the measure Angold et al. (1995) reported convergent validity with other measures of child depressive symptomatology, such as the Children’s Depression Inventory (CDI) and the Diagnostic Interview Schedule for Children (DISC). The MFQ-Self can discriminate between clinically depressed and non-depressed children in the general population. It should also be noted that the self-report version of the MFQ discriminates depression status better than parent-report, but combining the MFQ-Self with the parent-report score discriminates clinical status better than either measure alone. The present measure has a unidimensional factor structure and high internal consistency.

The measure was also validated by Rhew et al. (2010) in a sample of 521 sixth grade students with an average age of 11.5. They conducted interviews with these students and determined that the MSQ-Self was able to discriminate depressed and non-depressed children with moderate accuracy. At a cut point of four, where sensitivity and specificity most closely intersected, the MSQ-Self had a sensitivity of 0.66, and specificity of 0.61. This study also provides the non-depressed sample (n = 476) and depressed children sample (n=36), with means and standard deviations below:

Scores on the MFQ-Self range from 0 to 26, with higher scores indicating greater depressive symptomatology experienced by the child. Scores are also presented as two percentile ranks according to Rhew’s (2010) non-depressed and a depressed samples.

On the Depressed Percentile a score of approximately 50 represents typical responses for children who have been diagnosed with depression, and indicates clinically significant depressive symptoms.

When administered on more than one occasion a graph is produced showing change in symptoms over time compared to the depressed and non-depressed child samples.

Angold, A., Costello, E. J., Messer, S. C., Pickles, A., Winder, F., & Silver, D. (1995). The development of a short questionnaire for use in epidemiological studies of depression in children and adolescents. International Journal of Methods in Psychiatric Research, 5, 237 – 249. 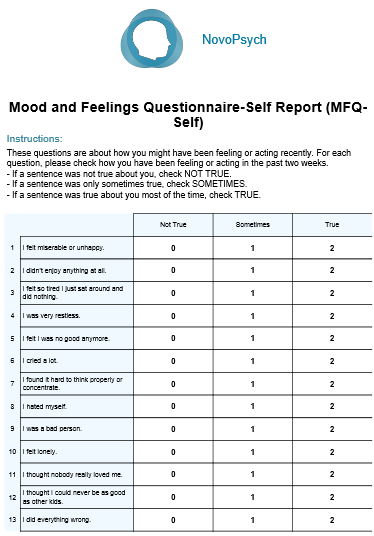