The Flourishing Scale is a brief 8-item measure of the respondent’s self-perceived success in important areas of life such as relationships, self-esteem, purpose, and optimism. The scale provides a single psychological well-being score and can be used to provide useful feedback for how to improve one’s life and may stimulate self-reflection. The Flourishing Scale is best used with individuals without clinical disorders, but rather with individuals seeking to enhance an already relatively adaptive lifestyle.

The scale was evaluated in a sample of 689 college students from six locations (in the USA and Singapore) and found to accurately measure subjective wellbeing. A number of well-being measures were administered in order to determine the convergence of the new scales with established measures, including the Satisfaction with Life Scale (Diener et al., 1985), Lyubomirsky and Lepper’s (1999) 4-item scale of happiness, and Watson et al.’s (1988) Positive and Negative Affect Schedule (PANAS). See reference for convergence correlations.

Additionally, a principal axis factor analysis of the Flourishing Scale revealed one strong factor with an eigenvalue of 4.24, accounting for 53 percent of the variance in the items, and no other eigenvalue above 1.0. The factor loadings ranged from .61 to .77. The test has a Cronbach’s alpha of .87 and a temporal stability over one month of .71. Among the sample of college students the mean score was 44.97 (SD = 6.56). This data can be used to derive percentiles.

Results consist of a single psychological well-being score (between 8 and 56), where higher scores represent higher levels of well-being, resources and strengths. Scores are also represented as a percentile derived from a normative sample. A percentiles of 50 represents typical (and healthy) levels of psychological well-being. Percentile scores below 15 indicate low well-being and are likely indicative of clinical mental health concerns where further assessment is warranted.

The scores can be used to provide useful feedback for how to improve one’s life and provides stimulus for self-reflection. If administered more than once percentile results are graphed over time. 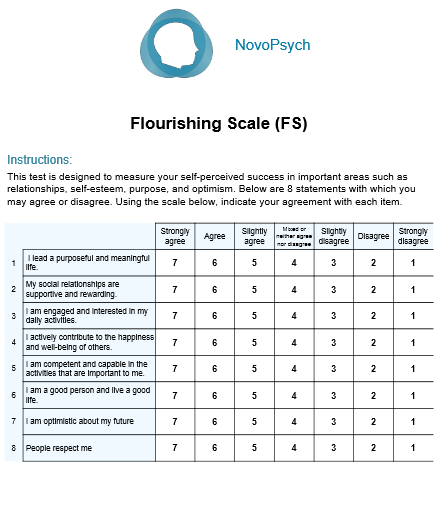 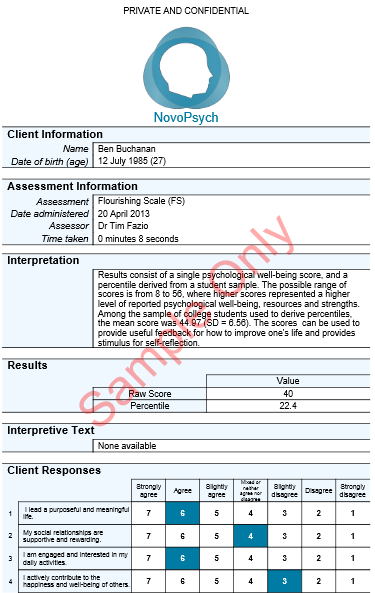