We’ve added measures that will be useful for clinicians that work with an Acceptance and Commitment Therapy (ACT) perspective to the NovoPsych test library. These scales measure key concepts important in ACT, such as cognitive fusion, cognitive flexibility, values-committed action, and acceptance of thoughts. I’ve often found that when introducing these ideas to clients, measuring the construct with a questionnaire helps make the idea more tangible for the client. We’ve put together a summary of these measures below, and hope you find them useful in developing a shared formulation with your clients. 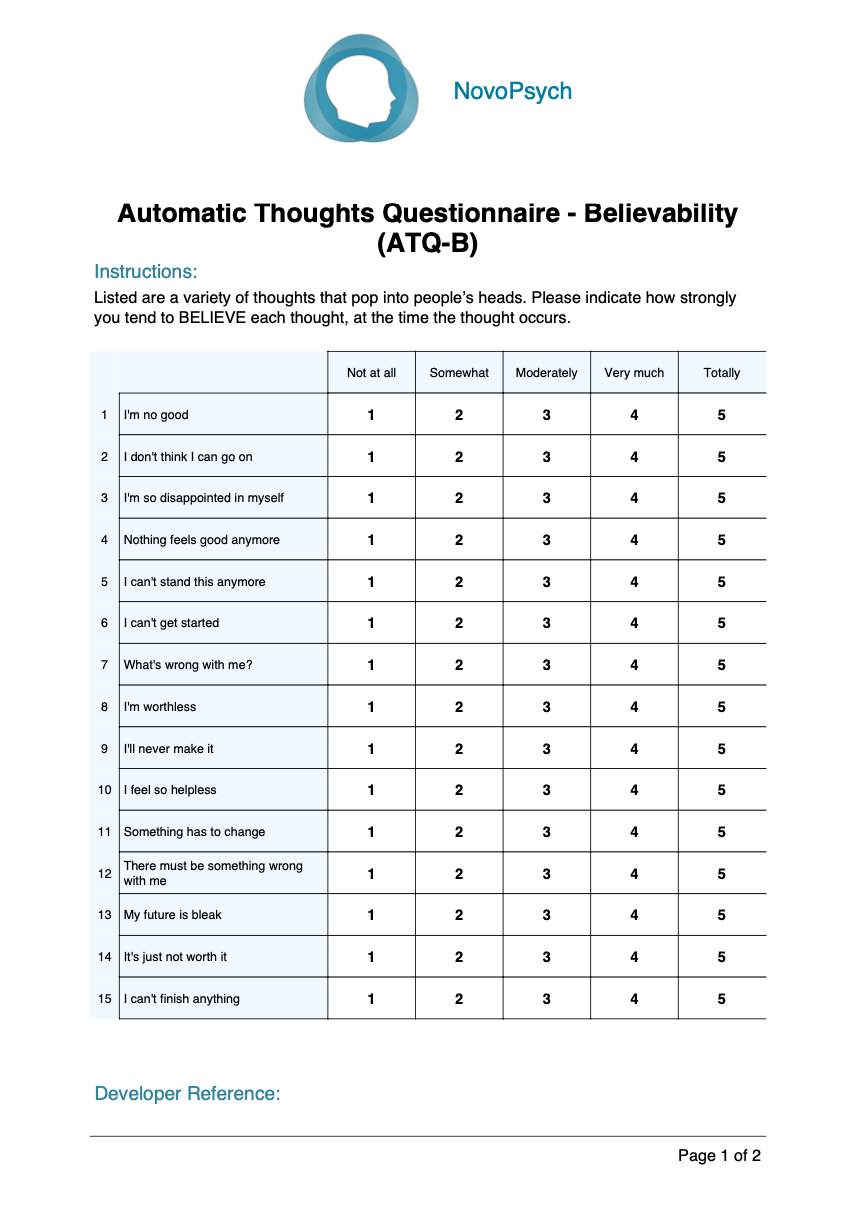 The Automatic Thoughts Questionnaire – Believability (ATQ-B-15; Netemeyer et al., 2002), is a 15-item self-report measure designed to assess the degree of believability of cognitions associated with depression. The scale does not measure the frequency of unhelpful thoughts, but rather measures the extent to which the client believes the thoughts to be true.

Consistent with the ACT concept of fusion, the ATQ-B asks how much the client believed a thought when they felt depressed/sad. Given that changes in believability of unhelpful thoughts occur independently of reductions in their frequency (Zettle & Hayes, 1986), the believability and fusion of thoughts is an important aspect to target in therapy (Zettle, Rains & Hayes, 2011). The ATQ has been found to be a reliable measure of cognitive change in depression in response to ACT and can therefore be a useful measure of progress in therapy (Zettle et al., 2011).

Learn more about the ATQ-B-15 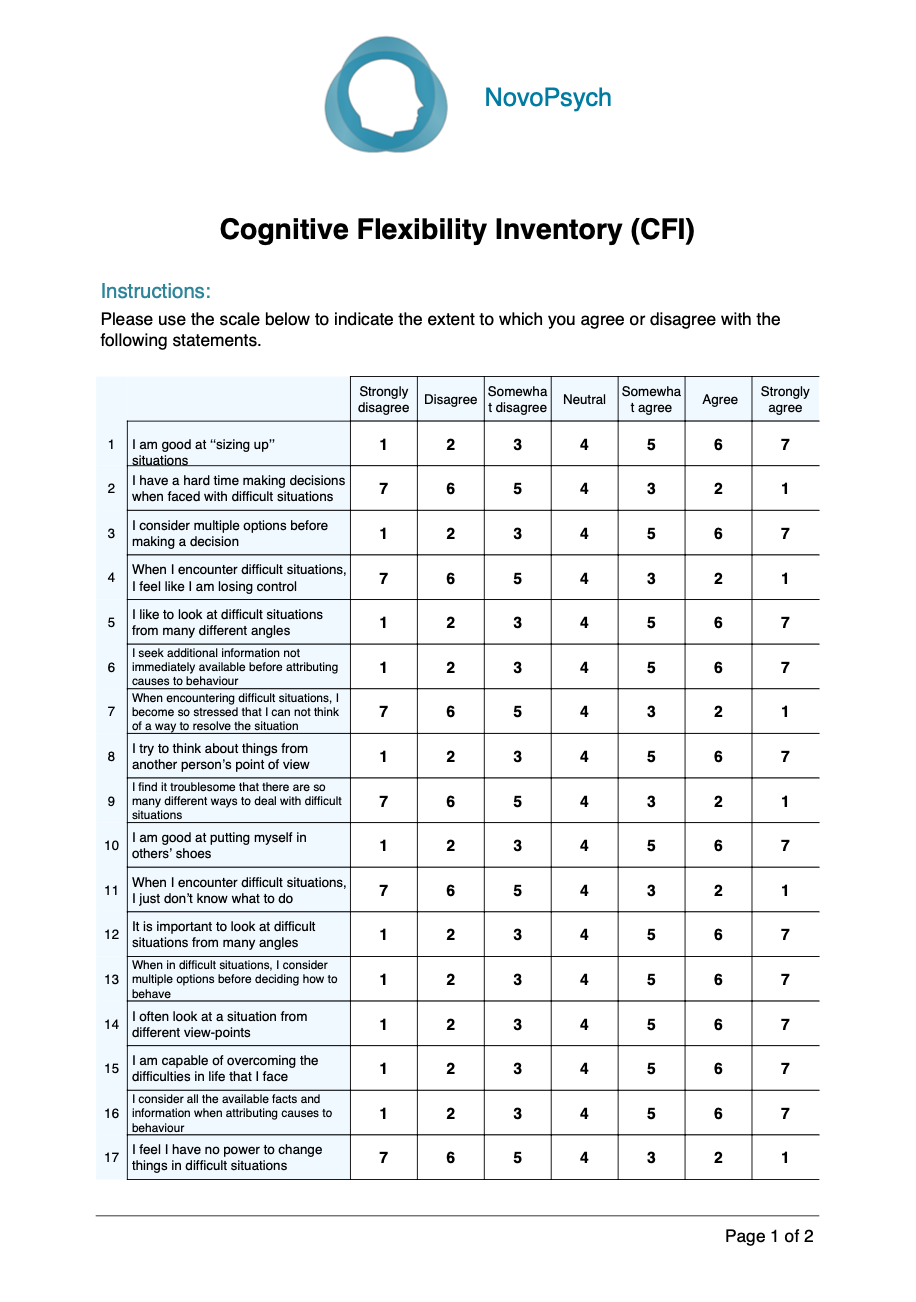 (2) Control – having an internal locus of control, or the tendency to perceive difficult situations as somewhat controllable.

While ACT encourages patients to accept those things that are out of their control, it also encourages them to commit to actions designed to enrich their lives, hence why the control subscale is useful. Individuals with high cognitive flexibility are more likely to react adaptively in response to difficult life experiences, while cognitively inflexible individuals are more susceptible to experiencing pathological reactions.

The CFI has been shown to differentiate between a clinical group (anxiety and depression) and a non-clinical sample (Johnco, Wuthrich, & Rapee, 2014). 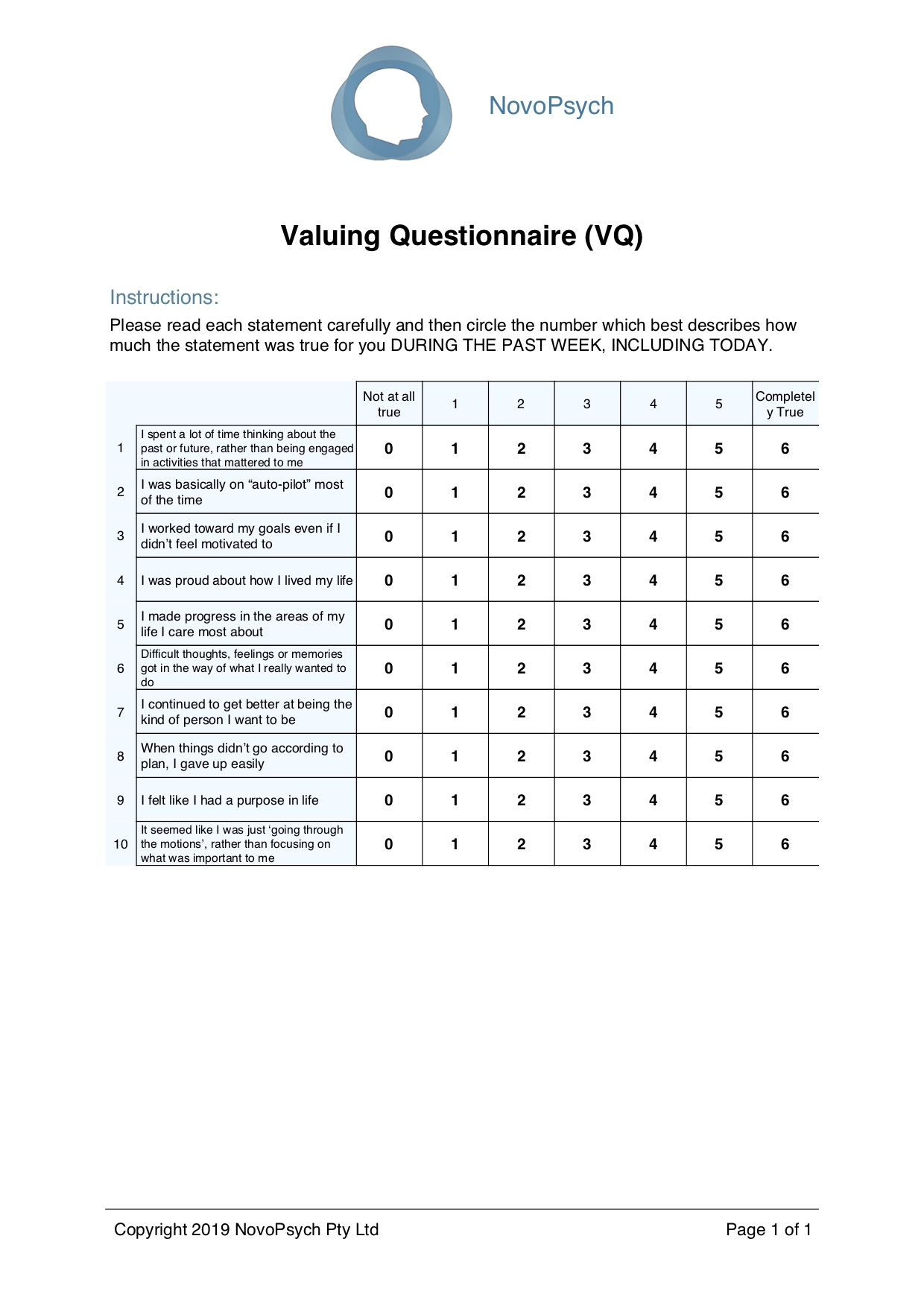 The Valuing Questionnaire (VQ: Smout et al. 2014), is a 10-item self-report scale designed to measure how consistently an individual has been living with their self-determined values or personal principles. Articulation of self-defined values is a core component of ACT-like therapies, and this scale is best used in conjunction with this process in therapy. The VQ measures “valuing”, which refers to actions one takes to live in accordance with values, rather than simply pleasant outcomes or satisfaction with life.

It has two subscales:

(1) Progress, defined as enactment of values, perseverance, and including clear awareness of what is personally important.

(2) Obstruction, which reflects the disruption of valued living due to avoidance of unwanted experience, distraction from values by inattention to values or undue attention to distress.

The Five Facet Mindfulness Questionnaire (FFMQ-15) is a 15 question self-report scale that measures mindfulness with regards to thoughts, experiences, and actions in daily life (Baer, Carmody, & Hunsinger, 2012). The FFMQ-15 measures 5 subscales of mindfulness: 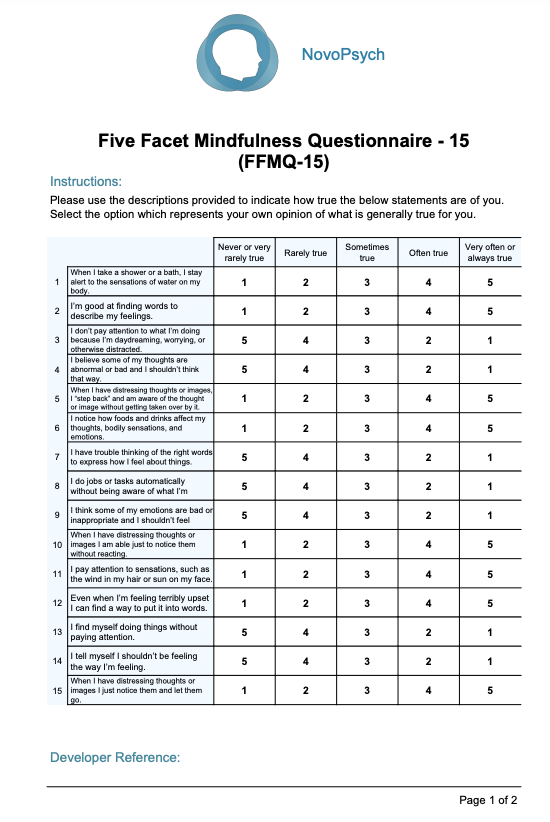 Mindfulness is considered a core skill in ACT,  and increased mindfulness is related to decreases in distress and other psychological symptoms. Studies on a large-scale population including students, professionals, and clinically depressed individuals showed that FFMQ-15 is a predictor for optimistic thinking, an overall uplifted mood, and subjective feelings of well-being (Baer et al., 2006; Bohlmeijer, Ten Klooster, Fledderus, Veehof, & Baer, 2011).

ACT is a cognitive-behavioural intervention that aims to foster psychological flexibility as a central means to human adaptation and wellbeing (Biglan et al., 2008). This means that in order to be psychologically flexible, clients must accept their own thoughts and emotions and act on long-term values rather than short-term impulses, thoughts, and feelings that are often linked to experiential avoidance (Hülsheger et al., 2013).

We hope the above measures will help you introduce key ACT based ideas to your clients and measure outcomes based on this shared formulation.