This inventory consists of 35 questions measuring four sub-scales of perfectionism:
– Concern over mistakes and doubts about actions
– Excessive concern with parents’ expectations and evaluation
– Excessively high personal standards
– Concern with “precision, order and organization”
Setting excessively high standards is the most prominent feature of perfectionism, accompanied by tendencies for overly critical evaluations of one’s own behavior, expressed in over concern for mistakes and uncertainty regarding actions and beliefs.
Some individuals take pride in their perfectionistic nature and such beliefs can be a key target for psychological intervention. This scale can be useful in highlighting that being highly perfectionist is in fact unhelpful. This test is appropriate for people 15 years and older and is especially appropriate for individuals with critical parents, anorexia, OCD traits or an anxiety disorder. Perfectionistic beliefs may be an important underlying cause of a range of psychopathologies.

Results consist of a Total Perfectionism score (total of subscales not including Organization) as well as four subscales, presented as raw scores and percentile ranks. The percentiles are based on the data from Stober’s (1998) sample of university students (mean age 26.3).
Higher percentiles indicate more problems while a percentile closer to 50 represents the average response. High scores on the Organization subscale do not contribute to Total Perfectionism and are not intrinsically problematic, but combined with high scores on the other factors may exacerbate dysfunction.
The four subscales are:
-Concern over Mistakes and Doubts about Actions
(Questions 9,10,13,14, 17,18,21,23,25,28,32,33,34)
– Parental Expectations and Criticism
(Questions 1,3,5,11,15,20,22,26,35)
– Personal Standards
(Questions 4,6,12,16,19,24,30)
– Organization
(Questions, 2,7,8,27,29,31) 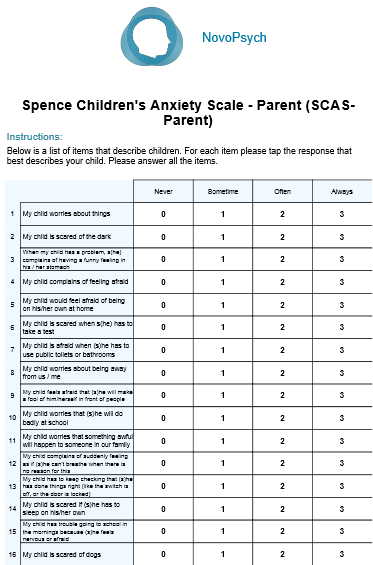