The Perceived Stress Scale (PSS-10; Cohen, Kamarch, & Mermelstein,1983) is a popular tool for measuring psychological stress. It is a self-reported questionnaire that was designed to measure the degree to which situations in one’s life are appraised as stressful. The PSS-10 determines how unpredictable, uncontrollable, and overloaded respondents find their lives. The scale also includes a number of direct queries about current levels of experienced stress. The PSS was designed for use in community samples with at least some high school education. The assessed items are general in nature rather than focusing on specific events or experiences.

Because levels of appraised stress are influenced by daily hassles, major events, and changes in coping resources, predictive validity of the PSS-10 falls off rapidly after four to eight weeks (Cohen et al., 1983).

There have been three versions of the PSS developed. The original instrument is a 14-item scale (PSS-14) that was developed in English (Cohen et al.,1983), which was subsequently shortened to 10 items (PSS-10) using factor analysis based on data from 2,387 U.S. residents. A four-item PSS (PSS-4) was also introduced (Cohen & Williamson, 1988), but its psychometric properties are questionable (Lee, 2012; Taylor, 2015). According to Cohen’s Laboratory for the Study of Stress, Immunity, and Disease (2021), the PSS is currently translated into 25 languages other than English.

Lee (2012) conducted a review of the psychometric properties of all three versions of the PSS and found that the psychometric properties of the PSS-10 are superior to those of the PSS-14 and PSS-4. The Cronbach’s alpha of the PSS-10 was evaluated at >.70 in all 12 studies in which it was used. The test-retest reliability of the PSS-10 was assessed in four studies, and met the criterion of >.70 in all cases. The criterion validity of PSS-10 was evaluated and it was strongly correlated with the mental component of health status as measured by the Medical Outcomes Study – Short Form 36 (Ware, Snow, Kosinski, & Grandek, 1993). The PSS was either moderately or strongly correlated with the hypothesised emotional variables, such as depression or anxiety, as measured using the Center for Epidemiologic Studies Depression Scale (Radloff, 1977), Inventory to Diagnose Depression (Zimmerman & Coryell, 1987), Beck Depression Inventory (Beck, Steer, & Garbin, 1988), Hospital Anxiety and Depression Scale (Zigmond & Snaith, 1983), State-Trait Anxiety Inventory (Spielberger, 1983), General Health Questionnaire (Goldberg & Williams, 1991), Edinburgh Postnatal Depression Scale (Cox, Holden, & Sagovsky,1987), Thai Depression Inventory (Lotrakul & Sukanich, 1999), and Depression Anxiety Stress Scale – 21 (Lyrakos, Arvaniti, Smyrnioti, & Kostopanahiotou, 2011).

Norms were determined for the total score (by age) for a sample of 2,000 community-based respondents in the US (Cohen & Janicki-Deverts, 2012):

A total PSS-10 score from 0 to 40 is presented, with higher scores representing higher levels of stress. Percentiles are also presented, comparing the results to a community sample (Cohen & Janicki-Deverts, 2012). A percentile of 50 indicates that an individual is experiencing an average level of stress when compared to other members of society. Average scores are also calculated by summing the scores divided by the number of items, and is a useful metric for ascertaining the general level of agreement on the likert scale (where 0 = Never and 4 = Very Often), as well as comparing sub-scale scores using a consistent metric.

There are two subscales in the PSS-10:

Cohen’s Laboratory for the Study of Stress, Immunity and Disease. (2021). Dr.Cohen’s Scales. Retrieved Oct 9, 2021, from https://www.cmu.edu/dietrich/psychology/stress-immunity-disease-lab/scales/index.html 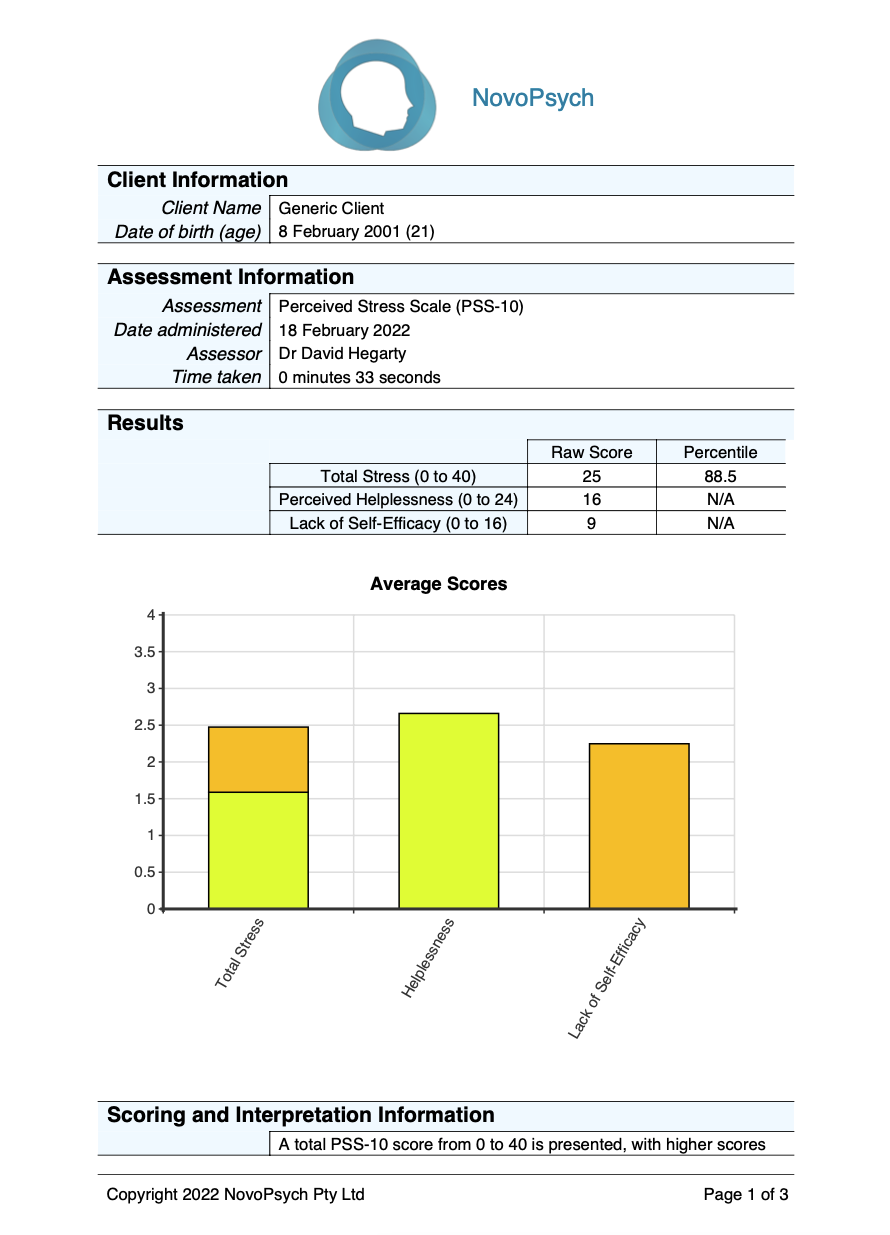