The Mood and Feelings Questionnaire (Short Version) – Parent Report (MFQ-Parent) is a 13-item measure assessing recent depressive symptomatology in children aged 6-17 years. The MFQ-Parent is parent-rated and asks the parent to report how their child has been feeling or acting in the past two weeks.

A child self-report version of the same measure (MFQ-self) is also available, and the two measures can be used in combination. It can be especially helpful to compare the responses from the parent and child to indicate level of agreement, cross validate and provide information about levels of emotional awareness.

The MFQ-Parent shows convergent validity with other measures of child depressive symptomatology, such as the Children’s Depression Inventory (CDI) and the Diagnostic Interview Schedule for Children (DISC). The MFQ has high internal consistency and a unidimensional factor structure. The MFQ-Parent can discriminate between clinically depressed and non-depressed children. It should be noted that when the MFQ-Parent score is combined with the self-report version score for the same child, there is better depression status discrimination with the combined score than with either measure alone.

Scores on the MFQ-Parent range from 0 to 26, with higher scores indicating greater depressive symptomatology experienced by the child. Scores are also presented as two percentile ranks according to Rhew’s (2010) non-depressed and depressed samples.

On the Depressed Percentile a score of approximately 50 represents typical responses for children who have been diagnosed with depression, and indicates clinically significant depressive symptoms.

Analysis of sensitivity and specificity data saw a cut-off score of 11 (Thapar & McGuffin, 1998). That is, a child who received a rating of 11 or higher from their parent on the MFQ-Parent is likely to have depression. Note that on the child rated version the cut-off score is less (8).

When administered on more than one occasion a graph is produced showing change in symptoms over time compared to the depressed and non-depressed child samples.

Angold, A., Costello, E. J., Messer, S. C., Pickles, A., Winder, F., & Silver, D. (1995). The development of a short questionnaire for use in epidemiological studies of depression in children and adolescents. International Journal of Methods in Psychiatric Research, 5, 237 – 249. 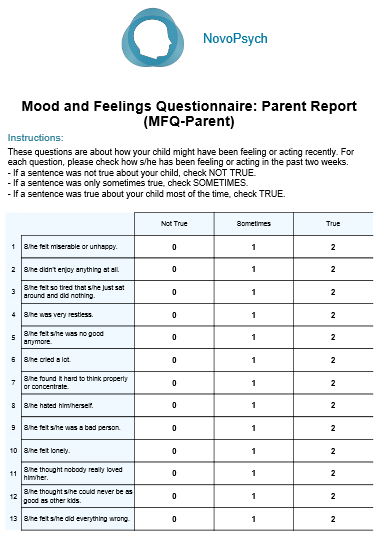